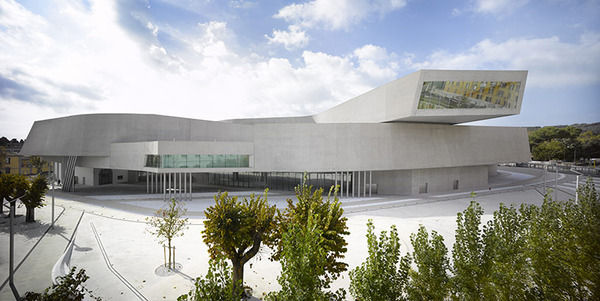 The Royal Institute of British Architects (RIBA) Stirling Prize is awarded to the best new building in the UK and Europe designed by a British architect. The 2010 shortlist of six buildings has just been released and the winner will be announced at the RIBA Stirling Prize Dinner on October 2nd. Named after the great British architect Sir James Stirling (1926-1992), the prize is run in association with the Architects’ Journal and Benchmark. The Stirling Prize is presented to the architects of the building judged to have been ‘the most significant for the evolution of architecture in the past year’.

This year’s shortlist includes two schools for the first time in the award’s 15-year history; a message perhaps to the axe-wielding education secretary, Michael Gove, on the value of good design. Ruth Reed, president of the RIBA, didn’t mince her words: "Investment in well designed schools demonstrates to teachers and pupils how much they are valued and has measurable impact – attendance and results rise; truancy and bullying fall. With the programme to improve our extremely poor school estate now much reduced it could be some time before we see such exemplar school buildings on the Stirling shortlist again." Another first in Stirling history, a total of three museums have made it on to the shortlist. An extension to the Ashmolean Museum in Oxford, a reworking of the Neues Museum in Berlin, and the newly built MAXXI Museum in Rome are all in the running for the £20,000 prize money. Reed described the projects as demonstrating ‘three very different ways of building and rebuilding museums and galleries’ and, again alluding to public sector funding cuts, explained that these buildings ‘are the fruits of an economic boom in the last decade and sadly may represent the end of an era’. The final contender for this year’s prize, and the smallest of the six projects short-listed, is a mixed-use development in east London, combining a studio, art gallery and office space with four private apartments.

Here’s a rundown of the six nominees vying for the prize:

Berlin’s Neues Museum was originally built in 1859 to showcase the Prussian Empire’s archaeological and scientific capability. Sustaining bomb damage in WWII, the museum has been sympathetically restored and reshaped by David Chipperfield and Julian Harrap Architects. The creative reworking of the museum, in which the major new material is pre-cast concrete, has been praised by the RIBA as an exemplar of ‘understated beauty’. The revamped museum has proved a hit with Berliners and David Chipperfield, who received the 2007 Stirling Prize for another German museum, is tipped by many to triumph again this year. 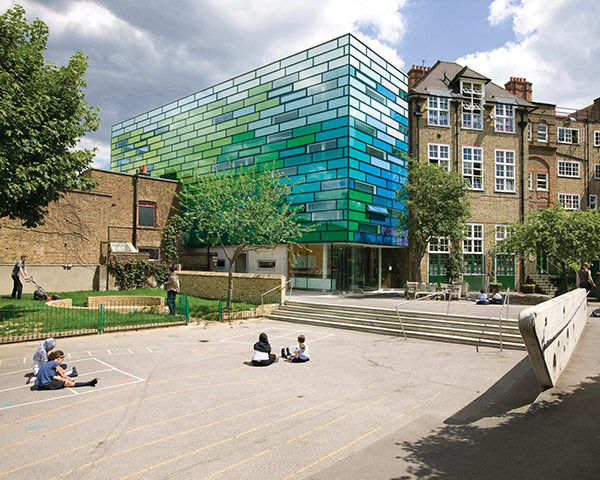 British-Iraqi Zaha Hadid is perhaps the best-known woman architect in history, but her work has struggled to gain acceptance in the UK, and she’s yet to complete a major building on home soil. (The first will be the London 2012 Olympic swimming pool and diving centre.) This is Hadid’s fourth nomination to the Stirling shortlist, but the prestigious prize has so far evaded her grasp. This lack of recognition, and the fact that RIBA considers the MAXXI to be Hadid’s best building yet, has the Rome museum ranked as odds on favourite at the bookies, with William Hill offering odds of 11/10. Located in the suburbs of the Italian capital, the MAXXI National Museum of 21st Century Arts is a building of sinuous curves and multiple intersecting levels; unwinding ‘like a ribbon in space’, says Hadid. The judges described the serpentine routes and pathways and the elegant unfurling of space as the ‘quintessence of Zaha’s constant attempt to create a landscape, a series of cavernous spaces drawn with a free, roving line’.

Once the target of firebombing and casual vandalism, Christ’s College School in Guildford now features a £14.4m extension by DSDHA, the firm of Deborah Saunt and David Hills. Both pupils and teachers have commented that a sense of pride in the new building has directly influenced an improvement in behaviour and that the wide, light-filled corridors and stairwells have reduced opportunities for bullying. This is a great example of how thoughtful planning, progressive architecture and humane design have far-reaching implications for individual wellbeing and social cohesion. Along with Clapham Manor Primary, Reed described the new building as a model of ‘what all schools should be: light, well-laid-out and well-equipped environments in which all students can flourish’.

A project to double the size of the Ashmolean in Oxford, the oldest museum in Britain, was completed by Oregon-born, London-based architect Rick Mather, without disturbing the neoclassical original. Erected by Mather’s team, the complex arrangement of new galleries is situated behind Sir Charles Cockerell’s 1845 Grade I listed building. The disorderly late-Victorian galleries at the rear have been replaced by a six-storey building adding 34 new galleries for the permanent collection and four for temporary exhibitions. The entrance hall now opens on to the light-filled atrium of the new extension. Surrounded by buildings on three sides, Mather maximised available light by putting a glass roof over the central space, creating an 80ft atrium traversed by steel and glass bridges. Either side of the central space double height galleries for major displays alternate with auxiliary galleries with lower ceilings. 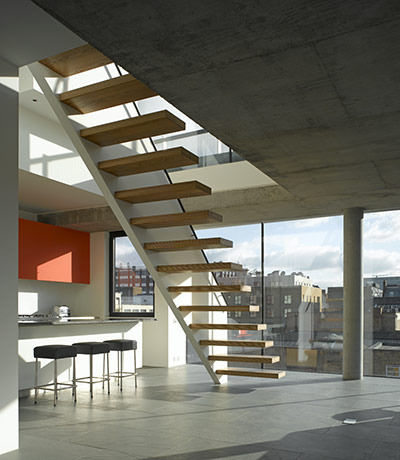 De Rijke Marsh Morgan’s extension to Clapham Manor Primary School is clad in vibrant multi-coloured glass panels. A freestanding addition to the school’s original 19th century building, the Stirling judges applauded ‘an inventive and uplifting example of what the next generation of school buildings could be’. Inside there are no enclosed corridors but galleried walkways; classrooms are accessed from the central atrium and pupils flow freely through a series of adjoining spaces.

Bateman’s Row in Shoreditch east London was built by architect couple Patrick Theis and Soraya Kahn. The mixed-use development houses an art gallery, studio and office space along with four flats. The building provides several rentable units, while Theis and Kahn live on the top three floors, complete with roof terrace and stunning views of London. The project took ten years to complete and the panel said it was executed with ‘extraordinary care and judgement’. On a small footprint, the scheme maximises light and space by building vertically in distinct phases over five floors and introducing wide expanses of plate glass. Internally exposed concrete throughout and rough-hewn edges at ground level respond to the building’s industrial origins and local setting.

The Stirling Prize judging panel will be visiting the six buildings nominated in the next few weeks before the winner is announced in October.